The Cleft Lift Procedure - A Cure Through Better Engineering

Utilizing the solid concepts of Dr. Karydakis’ work from the 1970s, Dr. John Bascom in Eugene, OR developed a variation of the operation called the cleft lift. Since that time, the operation has evolved and improved to its current form. The Cleft Lift is the procedure of choice for pilonidal disease requiring surgery, including:

The Cleft Lift procedure is the proper procedure for all forms of pilonidal disease requiring surgery and has a very low complication rate when performed by a surgeon experienced in the technique. Experienced surgeons utilize this technique as their primary operation for pilonidal disease. It should not be reserved as a fallback operation for failed conventional operations, and the later procedures should not be performed in the first place.

How the cleft lift procedure is performed

The cleft lift procedure is an outpatient surgical procedure that is intended to cure pilonidal disease. The procedure involves the removal of scarred or pitted midline skin and skin from one side of the natal cleft. The abscess cavity is cleaned out, and the scarred cavity wall is released and rearranged to obliterate the cavity. The skin on the opposite side of the cleft is mobilized (freed from the underlying tissue) out past the edge of the natal cleft on the other side. The deeper tissues of the now exposed buttocks cheeks are drawn and sewn together to ‘shallow the valley’ and to re-contour the cleft. The skin flap is then closed over the ‘shallowed’ valley and sutured to the side outside the cleft. The new natal cleft is less deep and smoothly transitions down toward the anus.  Without the valley and divots, debris and hairs can’t collect. The resulting wound is off to the side of the midline so it is exposed to air and can heal well. A temporary drain is placed under the flap of skin to prevent the accumulation of fluid and is generally removed in around one week. During this procedure, the only tissue that is removed is skin. It’s important that no deep tissue is removed, as this can lead to the formation of “dead” or empty space that becomes filled with infected fluid and leads to an early recurrence.

The procedure takes about an hour. It is performed under spinal or general anesthesia. Patients experience minimal discomfort. The wound is completely closed and no packing is required.

Most patients are allowed to return to most activities including athletics after the drain is removed, and full activity in a month. After a cleft lift procedure patients can wear bathing suits, walk in public locker rooms without embarrassment, and sit without pain.

How does the cleft lift procedure differ from other flap procedures?

The cleft lift is not like other flap procedures that either remove a lot of deep tissue resulting in disfiguring scars or that are so minimal that the cleft is not shallowed or re-contoured. Some surgeons make their incisions in the center of the deep, diseased area that makes the surgery hard to heal. Or, the flap incisions are often not moved enough to the side and get dragged back into the valley. If this happens, the valley is not reshaped and not shallowed. The persistent deep cleft again allows hair/debris to be trapped, leading to recurrent disease.

The cleft lift removes only the scarred skin, does not remove deep tissue, and puts the incision sufficiently to the side so that it can heal well. Also, the cleft lift procedure is not disfiguring.  Most patients find the resulting scar cosmetically acceptable.  Data confirms that flap procedures, like cleft lift, resulting in a true lateralized closure are the ‘gold standard’ in the treatment of pilonidal disease. The Cochrane Collaboration review of the surgical treatment of pilonidal disease concluded, “off-midline closure should be the standard management when primary closure is the desired surgical option.

The history of cleft reshaping procedures and the cleft lift

Dr. George Karydakis first developed the concept of asymmetric excision for pilonidal disease and published his experience in 1973. His operation demonstrated some important concepts: wounds off of the midline (where they are exposed to air) will heal, and a shallower cleft (because of his operation) helps prevent recurrent disease (shallow clefts don’t collect debris). The original Karydakis operation required hospitalization and caused a moderate degree of discomfort.

Utilizing the solid concepts of Dr. Karydakis, Dr. John Bascom in Eugene, OR developed a variation of the operation called the cleft lift. Since that time, the operation has evolved and improved to its current form. I had the opportunity to work with Dr. Bascom in 2002 and learned the basic concept of the cleft lift. A few years later, I had the opportunity to visit with Dr. John Bascom and his son Dr. Tom Bascom and observe them performing the cleft lift. I was pleased to learn that we have each developed similar, more contemporary versions of the cleft lift. I continue to refer to the procedure as the ‘cleft lift’ as a tribute to Dr. John Bascom, who has devoted a good portion of his professional life to this underappreciated disease. His hard work, insight, and excellent judgment led to a well-tolerated and reproducible procedure that can be performed in an outpatient setting.

About early disease and acute abscesses

Acute pilonidal abscesses should be treated with prompt surgical drainage. This is an office-based procedure and will yield prompt relief of pain. Don’t worry! The drainage procedure rarely causes significant discomfort and you should feel much better in hours. Antibiotics may be prescribed after a drainage procedure, but rarely should be prescribed without draining the acute abscess.

After healing from an acute abscess drainage, pits may become visible in the natal cleft midline. What to do at this point in time is controversial. Some surgeons recommend pit excision. While this may help prevent future acute abscesses or progression of pilonidal disease to a chronic abscess, this strategy has not been well researched. Sometimes, pit excision can lead to worse disease. Pit excision or “picking” is only appropriate for those patients who have one or few pits and no sinus.

Each case should be treated individually. Often, conservative and non-excisional care is the best approach.

If recurrent or persistent disease occurs after pit excision, then a cleft lift can be performed with excellent outcomes.

Sometimes too, pilonidal disease skips the early stage and presents for the first time as advanced disease that affects a significant portion of the cleft. In this situation, cleft lift surgery is necessary and can prevent worse disease in the future.

Description of the cleft lift procedure

The following diagrams demonstrate the principles of the cleft lift procedure. The portion of the body pictured here is the buttock area viewed while a person is lying on his/her stomach with the buttocks up facing the viewer and pulled apart to show the valley of the natal cleft.

In the diagram below, the outline represents the contours of the buttocks and anal area. The dashed line is the rim of the natal cleft and is marked while a patient is standing in a relaxed position. When standing, these lines meet. With the patient lying flat on his/her stomach and the buttock cheeks taped apart (as in these diagrams), the valley of the natal cleft is revealed. The red dots within the natal cleft represent dilated pores or ‘pits’. The red dot in the upper left corner is the sinus (tunnel) opening that is often associated with a chronic pilonidal abscess. 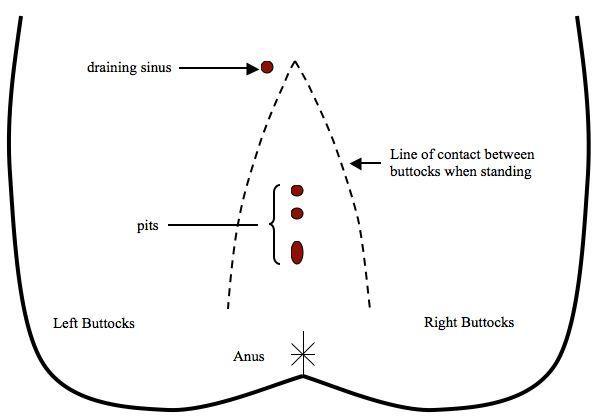 In the diagram below, an island of skin is marked to the left of the midline.  This purple area is excised and the flap is elevated off the right side of the cleft. The underlying abscessed tissue is unroofed and cleaned. The abscess cavity wall is preserved, as it will heal if in folded on itself. Next, the deep tissues of the ‘valley/cleft’ are sewn together (not shown) to accomplish three goals: 1) to make the cleft less shallow, 2) to re-contour the cleft to remove divots, and 3) to minimize tension on the flap. Minimizing tension on the flap is vital to preventing the incision from being dragged back into the cleft. The arrows show the direction of flap advancement (across at the top and middle of the cleft, and rotated around the anus). 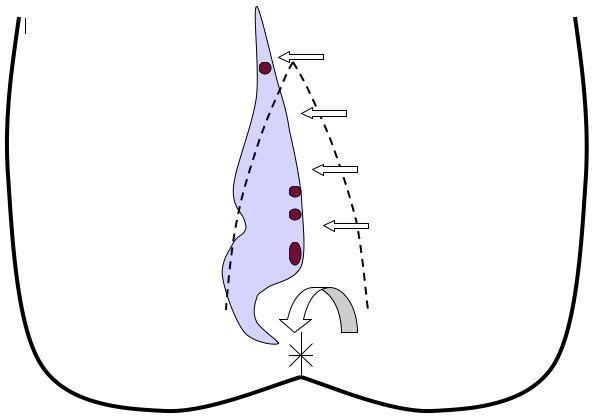 Below is the final result.

A passive drain (essentially a rubber band) is looped through a small hole in the lower portion of the incision and exits through a hole that is created in the upper portion of the coverage flap. The drain allows fluid to drain from under the skin flap so that it will stick to the underlying tissue. The drain is usually removed around a week after surgery. If you are travelling a significant distance to have surgery, you will be shown how to easily remove the drain yourself. How do I take care of the drain?

A drain will be placed at the time of surgery. The drain looks like a thin rubber band. The purpose of the drain is to keep the 2 skin openings (one at the top of the flap and the other in the lower portion of the incision) from closing early after the procedure and to aid in wicking fluid from under the skin flap. You will receive instructions on how to take care of the drain at the surgery center or hospital. Also, please view the drain care video below:

Office Hours
Get in touch